He’s the star-spangled man, the embodiment of “the best generation”, the scrawny lad-turned brawny superhero, and he’s back to face the complicated modern age head on. Steve Rogers/Captain America (Evans) assimilates to the 21st Century, keeping up with S.H.I.E.L.D. missions, making new allies and naturally, new enemies. Chief of these new enemies is the Winter Soldier, a shadowy, ruthless killing machine with ties to Rogers’ personal history. Chief of these new friends is Sam Wilson/the Falcon (Mackie), an ex-military paratrooper, therapist in the Veterans’ hospital and an expert in aerial combat, aided by a set of high-tech mechanical wings. S.H.I.E.L.D. director Nick Fury (Jackson) and member of the World Security Council Alexander Pierce (Redford) are putting a surveillance program into place that Rogers feels violates the personal liberties of the populous. Soon, Captain America, Black Widow (Johansson) and the Falcon find themselves embroiled in a massive, far-reaching conspiracy within S.H.I.E.L.D. 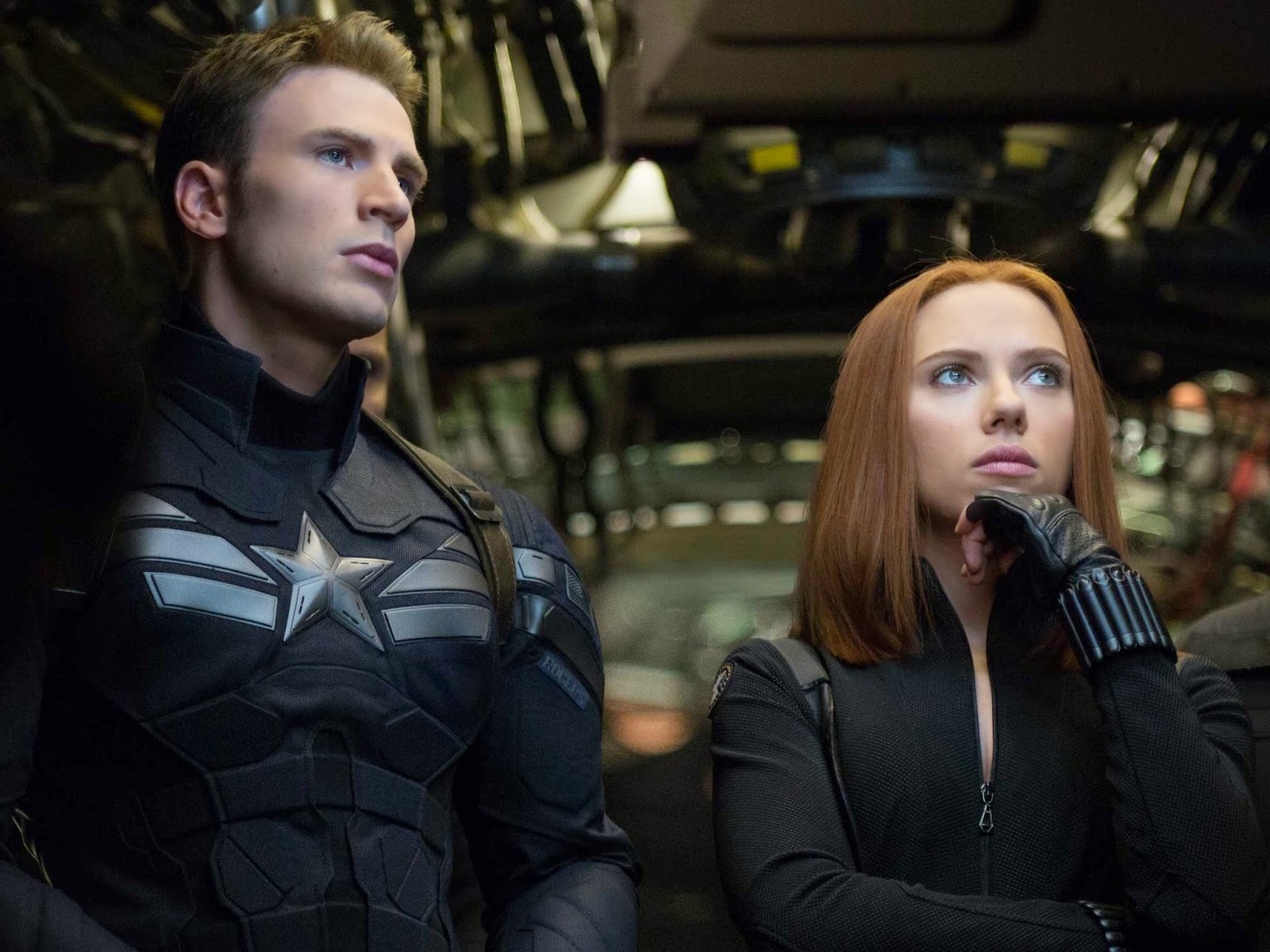 The Marvel Cinematic Universe has been carefully plotted and it’s been put together in the canniest of ways, now well into its second phase. Producer Kevin Feige and the executives at Marvel Studios have picked some out-of-left-field choices to direct their films, from Jon Favreau to Shane Black. The brothers Joe and Anthony Russo, best known for directing episodes of TV comedies Arrested Development and  Community, acquit themselves remarkably, handling the big-budget blockbuster spectacle with impressive aplomb. They’ve found an adequate balance between reminiscing about Cap’s glory days and putting him into action in a landscape of government surveillance and covert policing. Thankfully, the social commentary doesn’t feel too clumsy or heavy-handed. They’ve also injected an appropriate amount of humour into the proceedings – one of the items on Rogers’ list of things to catch up on is “Berlin Wall (up + down)”. 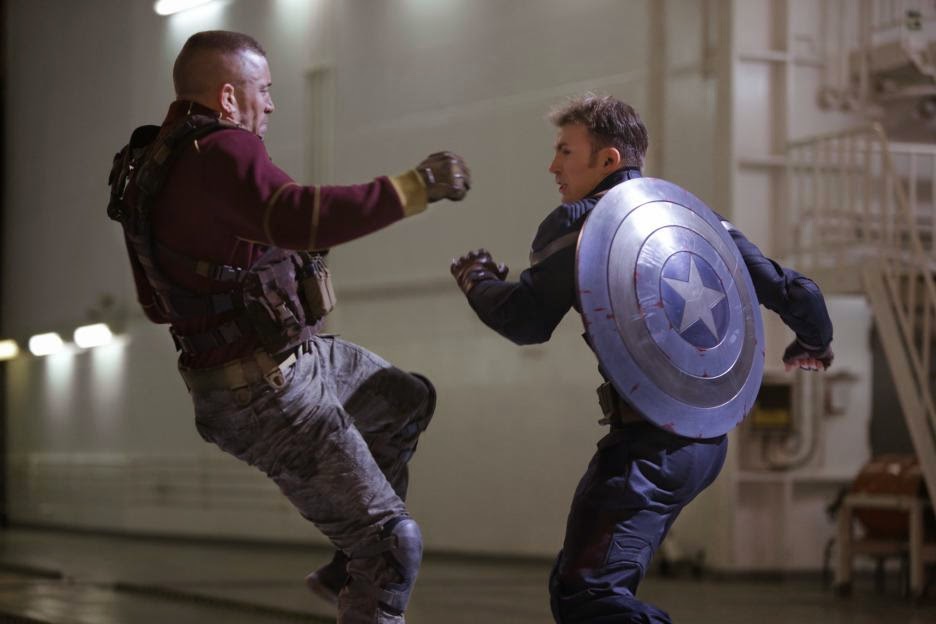 Captain America: The Winter Soldier has been touted as taking its cue from 70s political thrillers, classics such as All the President’s Men and Three Days of the Condor (make that Falcon). Indeed, most of the film is set in Washington, D.C. and if one were to break it down, the plot contains familiar tropes from this genre: the protagonist is kept in the dark, he’s made out to be a fugitive, there’s treachery at the highest levels and it’s up to “our man” and his closest associates to stop a dastardly scheme from unfolding. The way it’s constructed in Christopher Markus and Stephen McFeely’s screenplay though, it doesn’t feel like we’re going through the motions. As is the MCU trademark, a strong sense of continuity is maintained, so viewers are advised to have seen Captain America: The First Avenger and The Avengers beforehand. There is also a whole bunch of exposition just in case, but it is cleverly done, the main example being a well-designed exhibit at the Smithsonian National Air and Space museum (it probably should be in the National Museum of American History, but okay) on the life and career of Captain America which serves as a visually engaging “re-cap”, if you will.

Chris Evans plays Steve Rogers so well that it’s hard to imagine time when all of us went “really? The Human Torch?!” on hearing of his casting. This film has a character who is idealism incarnate up against a shifting, cynical new world. Captain America is also a character who lends himself well to some sentimentality, so we do get several scenes that shamelessly (and quite effectively) tug at the heartstrings. We also get a run through the 101 ways Cap can use his shield. Rogers has to re-evaluate who he trusts and how he fits in, and the relationship between him and Black Widow is explored, their diametrically opposite approaches to saving the day ultimately complementing each other. Johansson’s role in this film is larger than in Iron Man 2 or The Avengers, and we get to see Black Widow’s friendlier, softer side in addition to seeing her kicking as much ass as ever and busting some very impressive fighting moves.

To comic book fans, the Winter Soldier’s identity is no secret, but some might consider it a spoiler nevertheless. Sebastian Stan isn’t the best actor out there, but he manages to project the brainwashed steeliness of the guy with the cybernetic arm and the character pulls off myriad feats of badassery, never looking un-cool while at it. Anthony Mackie’s Falcon provides Captain America with both support in the battlefield and a welcoming link to the modern world; the film opens with them jogging along the Potomac together. Since Captain America can’t fly himself, teaming him up with a character who can does give action sequences more of a dimension.

Robert Redford’s authoritative presence undoubtedly strengthens the 70s political thriller vibe and even at 77, he cuts a great figure in a waistcoat. Seeing him alongside Scarlett Johansson conjures up thoughts that this might just be a really out there Horse Whisperer sequel. Fans of the comics will be pleased at the introduction of characters such as Batroc the Leaper (real-life MMA fighter Georges St-Pierre), Sharon Carter/Agent 13 (VanCamp) and Brock Rumlow/Crossbones (Grillo). Samuel L. Jackson and Cobie Smulders return as Nick Fury and Maria Hill respectively, Fury getting an action sequence all to himself. In addition to the obligatory Stan Lee cameo, there’s also a small surprise for Community fans. And Singaporeans, prepare to feel a twinge of national pride whenever Chin Han’s onscreen. 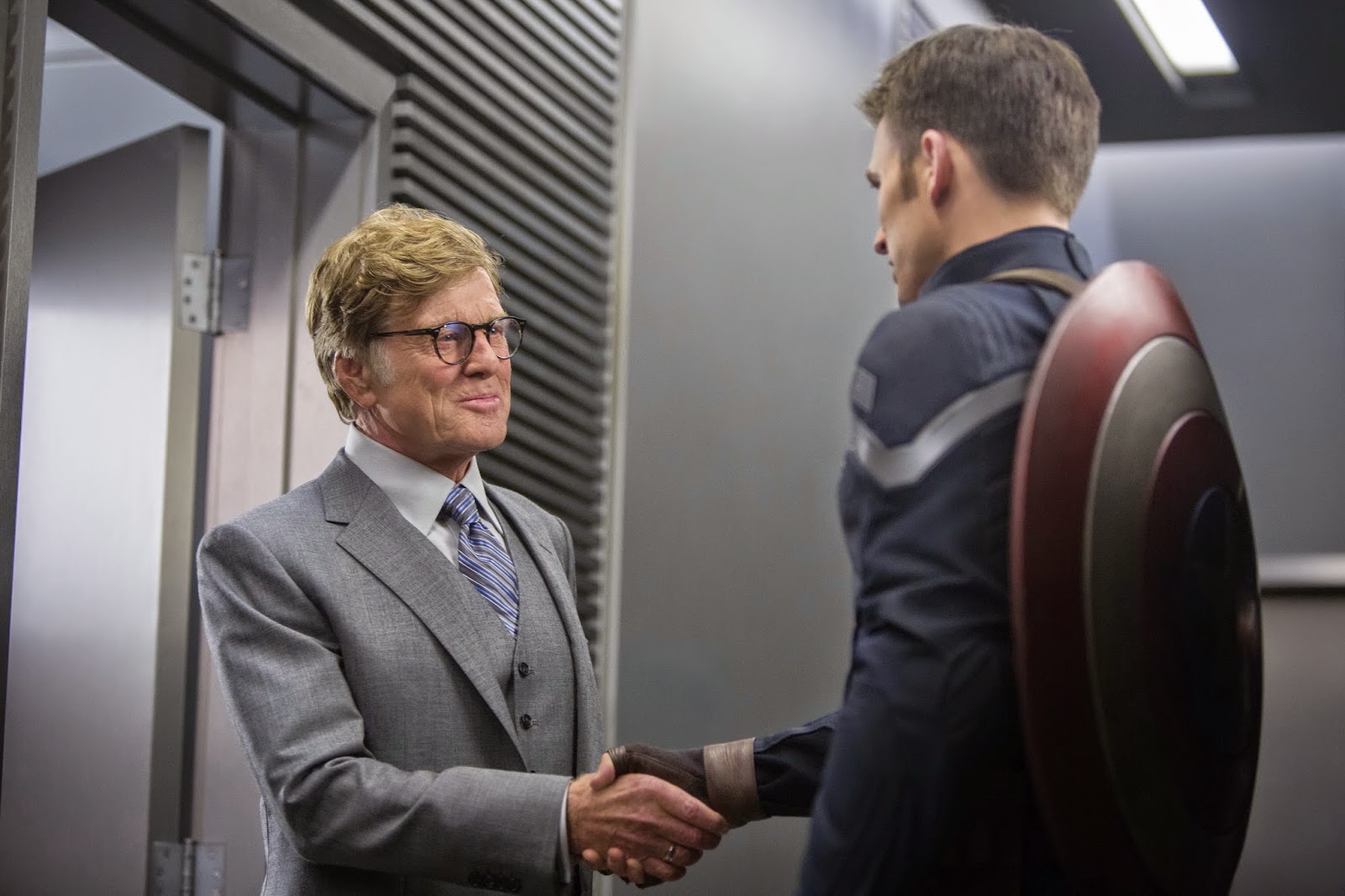 One of the criteria on which a Marvel Cinematic Universe movie can be judged is “has the status quo changed?” At the end of Winter Soldier, you can bet it has. There’s a colossal upheaval and the stage is set for further adventures. As is de rigueur for these flicks, there are two stinger scenes during/after the credits dovetailing right into The Avengers: Age of Ultron, and particularly tantalising ones at that. While there is a tendency for the film to go into shaky cam mode during the close-quarters fight scenes, the sheer scale of a Death Star-like hangar housing three next-generation helicarriers is quite astounding. However, the 3D effects aren’t exactly noticeable until the Falcon’s mid-air action sequence. As a conspiracy thriller superhero flick, Captain America: The Winter Soldier is entertaining, engaging, exhilarating stuff, delivering character dynamics, wit, thrills and expertly incorporating further elements from the source material, propelling the MCU ever further ahead.

SUMMARY: Hoist the red white and blue because The Winter Soldier is a winner.