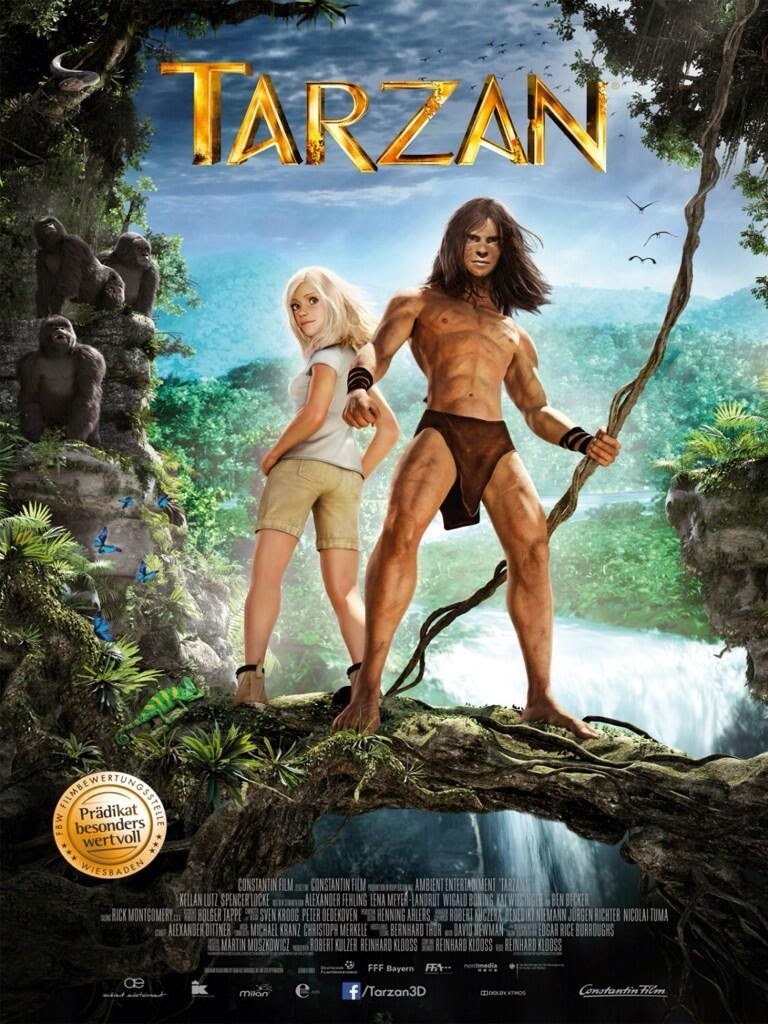 You’d think the much-maligned John Carter would have put producers off Edgar Rice Burroughs adaptations but here we are with yet another Tarzan. Updated to a contemporary setting, Tarzan’s parents John (Deklin) and Alice (Newman) Greystoke aren’t marooned but perish in a helicopter crash. Their son, originally named JJ (Craig Garner) survives and is adopted by a family of apes, growing into Tarzan (Lutz), the king of the jungle. He catches a glimpse of the beautiful Jane Porter (Locke) and is immediately smitten. She is the daughter of scientist Jim (Bubb), an associate of Tarzan’s late father. William Clayton (St. John), the evil CEO who has taken over Greystoke Energies in Tarzan’s absence, stages an invasion of the jungle under the pretext of facilitating Jim Porter’s research. Tarzan must save the love of his life, the world he grew up in and defeat the malicious magnate.

This had “dud” written all over it from the word “go”. We’re quite sure nobody is hankering for a new take on Tarzan, let alone one that has “updated” the premise in the most predictable of manners. Of course Clayton is no longer a poacher but a greedy corporation head. Of course there’s a mysterious meteorite that contains a revolutionary energy source, hidden deep in the jungle. It’s eye roll-worthy on many levels. It’s “AvaTarzan”, right down to a Quaritch-esque military leader named Miller (Bloom) and the laughable image of a convoy of about 50 helicopters flying into the jungle. The whole thing is a derivative affair, liberally aping (pardon the pun) Disney’s 1999 Tarzan, but without any of the charm or heart. Also, instead of being an infant at the time of his adoption by ape, Tarzan looks about 7 or 8 (the credits say he’s 4). At no point is it explained how he almost completely forgets about his childhood; the “feral child” aspect rendered fully implausible.

Created using motion capture animation, Tarzan doesn’t look entirely terrible – some of the environments are pretty and the fur simulation on the gorillas is good. But it’s still many steps down from the quality of CGI animation audiences have become used to. After the visual splendour of Tangled, Brave, Wreck-It Ralph, Rise of the Guardians, Frozen et al, it’s hard to be awed by something that looks like it was made a good 15 years ago. Thankfully, the characters don’t possess the eerie, hollow-eyed “uncanny valley” effect we all fear with motion capture animation, but there’s so little nuance in their gestures and expressions that it doesn’t feel like there were flesh and blood actors performing the motion capture. The 3D is okay, with noticeable depth of field throughout and there’s a fun sequence involving lava bombs flying out of a volcano, but there’s also the occasional “ghosting” (double vision) to contend with.

Kellan Lutz can try, but between this, the hilariously bad Legend of Hercules and the Twilight movies, we’re far from convinced he can act. At no point does his Tarzan sound believably tough – when he grunts, it sounds like he’s hacking up a hairball. Spencer Locke’s Jane takes the award for the in-distressiest damsel in recent memory, flailing and yelling for Tarzan to save her on multiple occasions. Their “love at first sight” is given no development and a romantic swim in the lake set to Coldplay’s “Paradise” (really) does not help matters. Almost all the voice acting sounds unnatural, but as a saving grace, the animals don’t talk. Veteran gorilla impersonator Peter Elliot, whose credits include Congo, The Island of Doctor Moreau, Gorillas in the Mist and indeed Greystoke: The Legend of Tarzan, Lord of the Apes does the motion capture for the ape leader, so there’s that.

The character of Tarzan is a cultural touchstone but this adds nothing to the mythos, wholly forgettable and unnecessary at every turn. The most undiscerning of young viewers might find this a relatively entertaining diversion and while unpolished, at least it’s not an ugly movie to look at. However, older viewers (especially those attached to earlier incarnations of Tarzan from Johnny Weissmuller’s to Christopher Lambert’s) will want to swing through the vines as far away from this as possible.

Summary: This Tarzan won’t be in your heart, it’ll be in the DVD store bargain bin.

Jedd Jong
Posted by Jedd the Jedi at 9:18 PM